I am sure you will agree, satirical blogs can make you laugh with the use of a simple headline.

And with millions of shares online, I thought it was about time I took a look at one of my favourite satire websites.

So, in this copywriting example, you are going to learn how to create comedy headlines that get likes and shares.

You will get the headline mechanisms that you can use to add humour to posts on Twitter, Facebook, blog articles outreach emails and more. 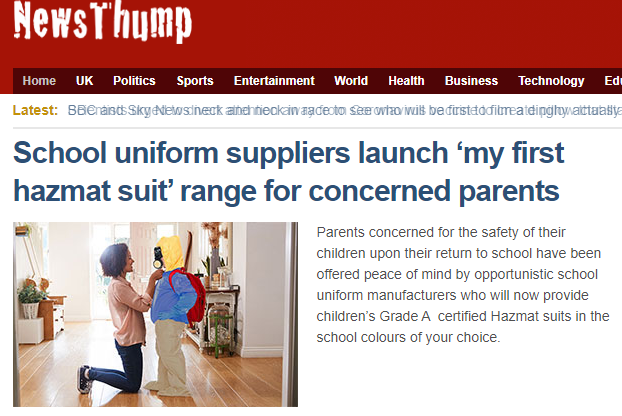 Newsthump is a satirical news blog that was started in 2009 by comedy writer Richard Smith.

According to Similar Web, the site gains an estimated 505,000 visitors a month with over 75% of them coming from the UK.

So, it is fair to say; they know how to write headlines that get clicks.

Why Humour Is Essential For Copywriters

If you are thinking 'great, how can I use this process?'

Because making people laugh is a huge key to standing out from the crowd.

What I Learned From Analysing over 1000 Viral Satirical Headlines

For this copywriting example, I looked at over 1000 of Newsthumps most viral headlines on Facebook to see if I could spot any patterns to their headlines.

Here's what I learned.

Every Comedy Headline Needs A Target

The goal of every headline is to get the click or the reader to move down the page.

And Newsthump writers are some of the best in the world when it comes to effortlessly getting the click.

The first part of this process appears to make sure your headline has a target.

Take a look at this headline:

The target of the joke is Chris Rea who had a smash hit song 'Driving Home For Christmas'.

That headline and it's 273-word article received over 252,000 Facebook shares, likes and reactions.

Another superb example of using a subject within a headline is this one:

Here Boris Johnson becomes the target of the headline.

The target doesn't always have to be a person though, and it also doesn't have to be stated within the headline itself. It can be implied.

"Specsavers to introduce new 'can you drive to the nearest castle' eye test".

The actual target of the satire is the advisor to Prime Minister Boris Johnson.

And his identity isn't even mentioned until midway in the body of the article.

And another excellent example of merely implying the target of the joke/ headline is:

The success, of course, will come with how instantly recognisable the target is from the headline words themselves.

When picking a target for your satirical headline, you can choose absolutely anything you like as long as you are prepared to deal with the potential backlash (and possible legal implications).

It could be a real person, a fan group, a political view, a musician, a popular song, popular culture, a football club...you name it, anything goes.

And to show another excellent example check out this headline:

Here Scottish duo The Proclaimers become the target due to their smash hit song 'I'm Gonna Be (500 miles)'.

Which brings us onto the next part of the satire headline process.

Once You Have A Target You Need A Subject

Once you know the target of your headline, you are going to need a subject.

This is where the rubber hits the road with headlines like these.

The target for this headline is panic buyers during the early part of the coronavirus pandemic.

So, if you were to break down the panic buying, what can you think of that stood out?

But in this case, the writers chose the never-ending posts on social media of empty shelves.

And I was one of those doing that kind of post on social too.

So, how can you find some ideas for the subjects of your satirical headlines?

Well, one of the best tools is Answer The Public.

Answer The Public is a tool used by SEO agencies and writers, but it works great for identifying subjects to use in satirical posts.

Once you land on the home page, enter the subject for your comedy and you will receive a long list of all the questions people ask about that subject on the web.

For example here are a few from our Boris Johnson search.

And within seconds you could create a NewsThump style headline with this process such as this one I came up with:

So, after you identify a target and a subject, what comes next?

How To Clash Context For A Great Headline

A clash of context occurs where you take something and place it where it shouldn't be.

So, a Vegas showgirl in a Convent is one example.

A Prime Minister in a fridge is another.

Of course, people and places are just one way to clash context.

You can use groups of people, employees of businesses, careers, historical figures, mythical creatures and more.

In the above example, the former British Prime Minister Theresa May is placed at the Bafta awards ceremony.

Clearly, she is the target, and the subject is her Brexit negotiations.

By putting people where they wouldn't usually be, you can gain a lot of success.

The next option for your satirical viral headline is the use of an inappropriate action.

It could be something someone has said or done, either works fine, such as this headline used by Newsthump:

"Tony Blair relieved he never wrote 'Saddam has weapons of mass destruction' on the side of a bus".

Here is another example:

In this headline politician, Michael Gove is the target, his general work as a politician is the subject along with his self-confessed drug use.

The inappropriate action is, of course, him going on a 3-year bender (again, we would hopehe wouldn't do this, but you never know).

The final mechanism that I want to cover in this copywriting example is the great big lie.

This is where you find something someone or something famous has done or said and then tell a lie about them/ it.

The best way to achieve this is to look for the opposite of what they are saying/ are doing.

This headline shows process being used:

"Cadbury to release gravy-filled Creme Egg in the North."

The target here is people in the North of England, and the subject is their love of gravy.

So, to showcase this, they have told a great big lie.

Cadburys is always releasing a new version of their famous cream egg but at no time have they released one with gravy.

And here is another example:

Queen to revoke US Independence because 'they can't be trusted with it.'

By telling a great big lie that jumps on the back of a calendar event or popular activity, you can quickly get some smiles and clicks.

OK, so there you have it.

Did you enjoy it?

Do you want more?

Then jump onto our email list to make sure that you never miss an article again.

The Product Description Secrets That Sold £220 Million of Coffee

The Direct Advertising Secrets of a $28 Million Dollar Supplement Business

Please log in again. The login page will open in a new tab. After logging in you can close it and return to this page.