The Ad Copy Of A Direct Marketing Legend

I'm sure you will agree.

Ads bombard us on every platform.

And right now, Facebook is sending in the heavy ad artillery by showing us one almost every other post.

Ad blindness is becoming real and people just aren't clicking like they once did.

So, when one of the worlds most well known direct marketers puts a Facebook Ad out, you can bet your life, it would be a good one.

And in this post, I am going to break the advert down for you and pull out all of the juicy learning points.

The Return of A Legend

Matt Furey is a legend in the world of direct marketing, and I am a massive fan of his book Combat Conditioning.

If you want to get into shape fast, this is the book you need.

That said, we all know a great product is not always enough, so when I saw his new Facebook Ad for his book, my eyes were all over it.

Here it is in full (click the image to enlarge it) 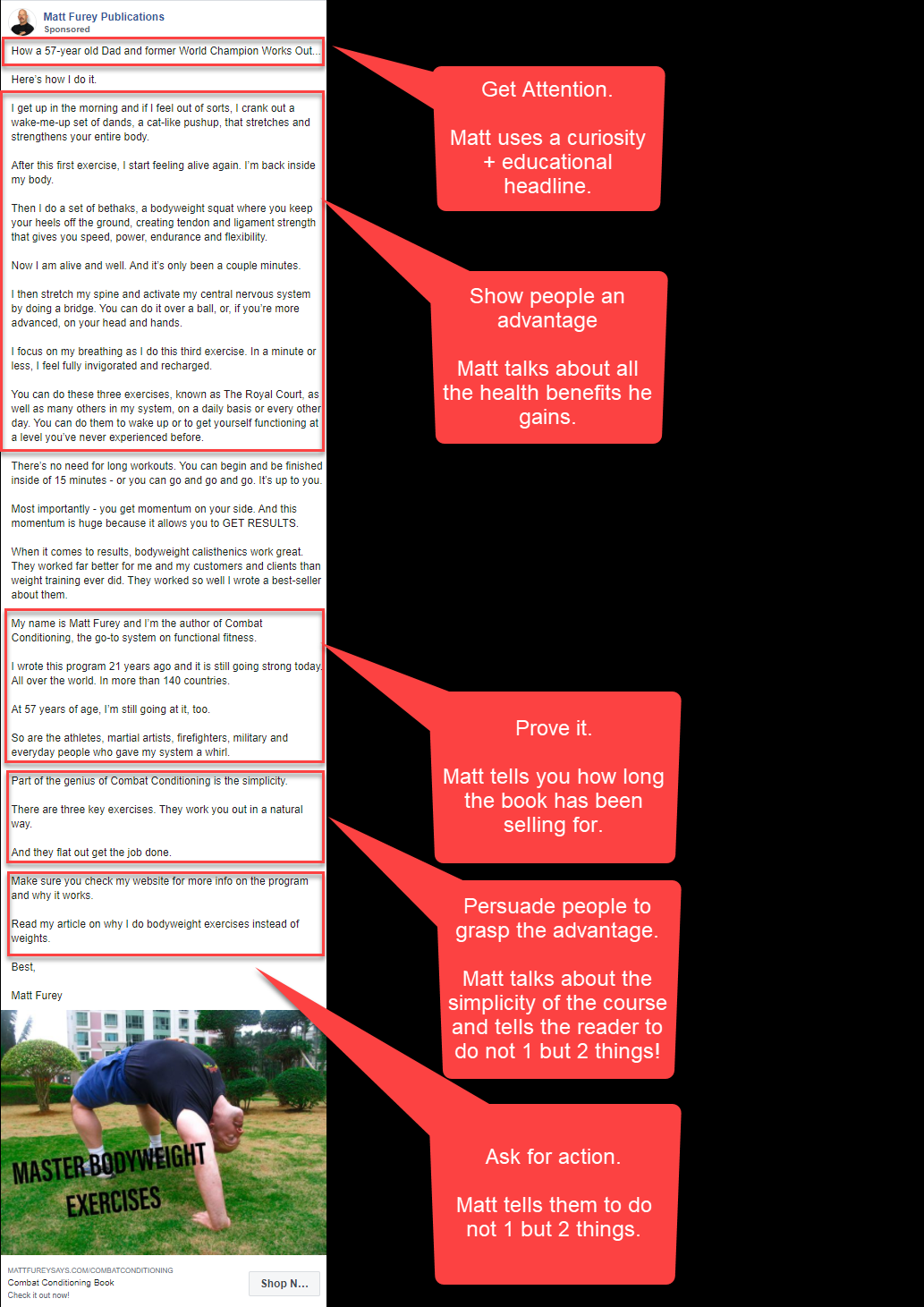 The Fundamentals Of A Great Ad

There are a lot of ad formulas knocking around, and I don't know which Matt used.

But the formula taught by Victor O. Schwab in his classic book 'How To Write A Good Advertisement' seems to fit perfectly.

Let's break it down.

Matt grabs your eyeballs both with his cool image but also this tremendous first sentence.

This is a classic 'how' headline, but it grabs your attention because the image Matt uses is of a super flexible person, yet the headline tells you he is 57.

This is an excellent use of imagery along with the shock factor of the first line, "what...that guy is 57." 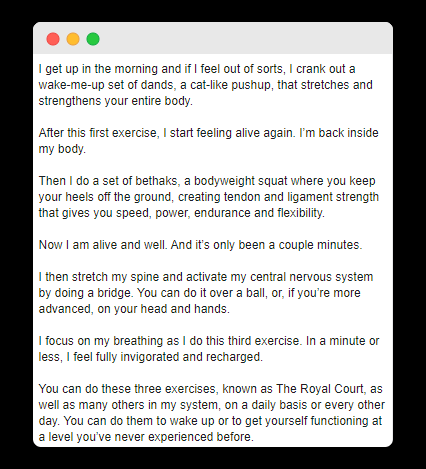 This next section is where Matt builds up the desire and shows them the advantage of what he is selling.

These are very powerful words and just lay out the advantages of using this product. 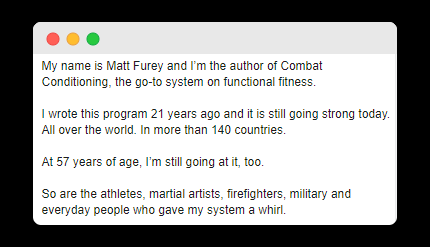 To prove that the book is worth purchasing, Matt talks about his age and that he is still using the system.

He also references the number of years it has been selling and throws in that it is being used by martial artists and firefighters.

Although these are simple words, they re-enforce the message and give social proof without actually giving any testimonials at this stage.

Persuade People To Grasp This Advantage

The reason I love the formula of Victor O. Schwab is that there is a focus on encouraging people to grasp what is on offer mentally.

In Schwab's own words:

"The advantages of the product are presented so vividly, so dramatically that he (the reader) finds it practically demonstrated to him as he reads."

Matt does this with a few lines where he talks about the fact there are only 3 exercises, and they flat out get the job done.

Many writers make the mistake of thinking that the ad is designed to close the sale.

That is simply not true.

The job of the ad is to move them closer to the sale.

Moving closer might be clicking on the ad and going to the website, or calling up a number, or asking for a quote.

But it is an action to move them to the next step in the sales process.

Well, I have to admit I loved how Matt has done this with the final part of his ad.

He doesn't only ask for action; he gives the reader something to do.

So, he isn't trying to sell the product but to get the audience to move closer by checking out his programme and also reading his article on bodyweight training.

So, Matt isn't only giving an action; he's asking them to go deeper into his site and read his content.

I am sure you will agree, the advert used by Matt Furey is both easy to read, intriguing and encourages action.

So, how are you going to use this ad?

And are you going to use this ad formula?

If so, let me know how you go on and don't forget to sign up for my email list.

The Greatest Copywriters of All Time (Past & Present)

The Product Description Secrets That Sold £220 Million of Coffee

Please log in again. The login page will open in a new tab. After logging in you can close it and return to this page.